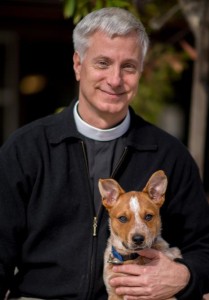 Rob grew up in Pittsburgh, Pennsylvania, as the oldest of three children. He moved to California in 1997 and lived in the Bay Area for about twenty years before moving to Arroyo Grande in 2015. After having been Presbyterian for much of his life, Rob was drawn to The Episcopal Church in 2005 as he was discerning a call to ordained ministry. Rob has been the Rector or Priest at St. Barnabas since July 2015, and he is responsible for all aspects of parish life. Prior to this call he was the Interim Rector of St. Thomas’ Episcopal Church in Sunnyvale. Rob has also served as Associate Priest at Calvary Episcopal Church in Santa Cruz and at St. Mark’s Episcopal Church in Palo Alto.

Before being ordained, Rob worked in two high-level finance positions. From 1997 to 2003, he worked as Finance Director, PC Sales, for Hewlett Packard, where he led the finance side of a $5 billion PC sales business, and managed a team of 30 people. He also worked for five years as Controller, Finance Talent, for Cisco Systems, where he led efforts to improve the career planning and development for the 2,600 people in Cisco Finance including university recruiting, rotation programs, mentoring circles, leadership development, and manager development.

Rob spent many years in school and jokes that he is overly educated. He graduated from Northwestern University in 1986 with a B.A. in Economics and Computer Studies. He earned an MBA in 1991 from the Fuqua School of Business at Duke University. He received a Master of Divinity degree in 2007 from Fuller Theological Seminary and a Certificate in Anglican Studies in 2008 from the Church Divinity School of the Pacific. He was ordained to the diaconate in June 2009 and to the priesthood in December 2009, both in the Diocese of California.

Rob is married to Jeff Diehl, who is the Principal and CFO at Albion Environmental, Inc. (an environmental consulting firm with offices in Santa Cruz and San Luis Obispo). Jeff has served in many capacities with the Diocese of El Camino Real and is currently the Secretary to Convention and to the Board of Trustees. Rob has an adult daughter who lives in Redmond, Washington, with her husband and son.

Outside of church, Rob is a certified Master Gardener, sings with the SLO Master Chorale, and performs with Central Coast Gilbert & Sullivan.

Deacon Susan thinks of herself as a native to San Luis Obispo County though she was born in Riverside, California and spent her first 12 years of life there. She has lived in all parts of San Luis Obispo County starting with 17 years in Grover Beach where she completed 7th-8th grades at Judkins Middle School and 9th-12th grades at Arroyo Grande High School. The next 18+ years were spent living in the North County where her daughter and son were born. Shortly after her daughter’s graduation from high school she moved to Morro Bay where she lives with her husband, Jim Arnold.

The Rev. Arnold worked as a nursing assistant in a long term care facility until a position at The Tribune Newspaper (then called the Telegram Tribune) as a phone clerk took her on a journey lasting nearly 28 years in the Circulation Department. There she became adept at multi-tasking while learning everything office; from old time IBM Selectric typewriting and ten key adding machines to modern computer data entry and processing; from a two line push button phone system with no messaging to modern computerized phone services. Learning to operate these tools efficiently was imperative as the focus in the Circulation Department is the customer/subscriber. Because of her ability to manage customers and systems, the Rev. Arnold became the go-to person and was the key trainer of the out-of-country representatives when the company outsourced.

The Rev. Arnold was baptized in a Methodist church but never settled down to any particular denomination until her then boyfriend, who was born into the Episcopal Church, asked her to go to church with him. She came to realize that this was the church home for which she had been yearning. Though she enjoyed her work, the call to ordained ministry was too strong to ignore so she retired from The Tribune in 2012. After 3 years of study, Rev. Arnold graduated from the School for Deacons in Berkeley and was ordained a Vocational Deacon on June 6, 2015 at Trinity Cathedral, San Jose.

Born in Detroit, Michigan on July 9, 1938, the Reverend Bond grew up outside the village of Yorktown Heights some forty miles north of New York City. He finished high school in 1955, Kenyon College in 1959, and the General Theological Seminary in May 1962.

Ordained deacon and priest that year, he was assigned by the bishop of New York to the Cathedral Church of St. John the Divine as an Assistant Minister. From there he moved on to a similar position at St. Stephen’s Cathedral in Harrisburg, Pennsylvania, in the spring of 1964. He then served as Rector of St. Paul’s, Harrisburg, from the spring of 1968 to the spring of 1979 when he and his family moved an hour north. There he became Rector of St. Matthew’s in Sunbury, Pennsylvania, a position he held until retirement. The Reverend Bond also served as Vicar of St. Mark’s, Northumberland, from January 1989 to retirement.

He married Kathy in September 1962. They now enjoy three grown children and four grandchildren. He retired August 1, 2003, and they moved from Sunbury to Grover Beach in June 2004 and quickly got involved with St. Barnabas..

Carole has replaced Sandy Matson as the Parish Administrator at Saint Barnabas after Sandy retired in August of 2019. She has been involved with the parish through her parents who have been long time parishioners. Carole previously worked in video production and graphic design and is grateful to use those skills to help bring worship services online to those who are unable to join us in person.

Janis Johnson has served as our Organist and Choir Director since
December 2010. She holds both the Service Playing Certificate and Colleague Certificate from the American Guild of Organists. Previous to coming to St. Barnabas she served for many years as Organist/Choir Director at St. Peter’s by-the-Sea Episcopal Church in Morro Bay; Organist at St. John’s Lutheran in Arroyo Grande; Organist at Mt. Carmel Lutheran in San Luis Obispo. She is the accompanist for Canzona, a women’s chamber choir ensemble based in San Luis Obispo. Over the years she has served as an accompanist for Pacific Repertory Opera, Cal Poly choirs, Cuesta choirs, and many instrumentalists. She also maintains a private piano studio of about 30 students in Morro Bay.